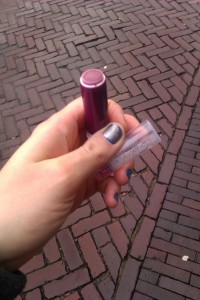 Two pairs of old running shoes were donated at a used clothing and shoes collection point. I had these sitting in my office for ages so that I could go for a run at lunchtimes, but it never really panned out. I think I kept them to avoid admitting that I was not living up to my idealized running lifestyle.

A lip balm that I used until the absolute last moment of usefulness was chucked in a bin. I wanted to get my money’s worth out of it, which is a constant source of regret and niggling disappointment in relation to owning and keeping stuff.

Some national geographic magazines were supposed to be recycled but ended up being chucked in with the regular trash (the paper recycling was full and a bossy neighbour was hassling me about leaving them in a box next to the paper recycling). I resisted throwing these out for ages because National Geographics seem to be symbols of the way that I think of myself: interesting, photographic, scientific, clever, sensitive to world issues, etc. Holding onto them was an arrogance, as if I could be all those things by keeping some magazines instead of just being the things that I wanted to be.

A bong went in the glass recycling bin. Some friends gave it to me but I never used it. I thought it might be funny to turn it into something else, but I never got around to doing any thing with it. Holding onto it was a way of trying to be mysterious, or cool, or dangerous, or creative, or whatever. I chucked it out and feel better for it.